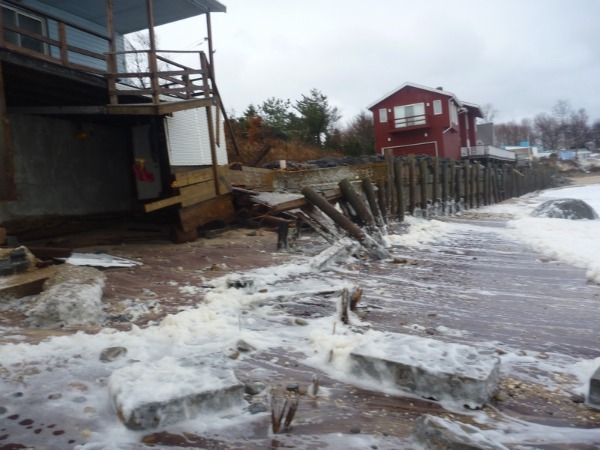 Joanna Lane, reporting from Cutchogue, notes that even as the storm Irene appears to have passed, they are still getting Tropical Storm-force winds, that continue to topple trees. Lipa reports that 442,000 customers are without electricity and Joanna reports that the internet is down. Amateur Radio is still functioning and her husband, Dennis, has been successfully monitoring the Peconic Amateur Radio Club repeater at 440.050 MHz. Anyone with a scanner can tune that frequency for updates.

Main road is closed off at Cox lane because of downed trees, the King Kullen supermarket appears to be shut down. Eastern Long Island Hospital has reportedly made an arrangement with the Cross Sound Ferry to bring food from Connecticut to the hospital. Peconic Bay Blvd at Laurel Lane is blocked by the authorities because of downed trees.

While it has been reported widely that Irene brought lots of rain, that does not appear to have happened on the North Fork. wind, sometimes reaching as high as 85 mph was (and still is) the principal culprit.

Joanna feels that it is not over yet, there are still more trees likely to come down.

This report was relayed by telephone out of state (where the internet still works) to be posted on SoutholdVOICE.