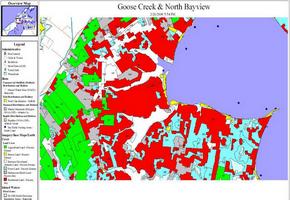 Report by Dave Bergen on the Ecosystem-Based Management Seminar, Feb 26th in Greenport

First off, I apologize in advance for the length of this post, but like the program, the information was (is) very complex, complicated and difficult in some ways to grasp.

I attended the seminar last night (Wednesday 25th) in Greenport which was put on by NYDOS. Given the fact that it was only marketed this week, attendance in numbers was very poor (13 people). But, what I found very impressive was the diversity of the participants who attended. There were two marine business owners, a couple of people from the Sierra Club, several commercial fisherman, a marine contractor, a former College professor of sciences, and SoutholdVOICE’s own representation from the Lanes!

First a little about the program. I freely admit to plagiarizing much of the following information from their handouts. NY State passed a law in 2006 which created a Ecosystem Conservation Council to come up with an ecosystem-based management (EBM) program to achieve sustainability of our coastal resources, watersheds and their communities. The Council is a collaboration of nine state agencies with responsibilities for managing human activities that impact our ocean and Great Lakes watersheds, and the communities which depend upon them. EBM is an emerging, integrated approach to resource management that considers the entire ecosystem, including humans. (what a concept!)

The goal of EBM is to maintain an ecosystem in a healthy, productive and resilient condition so that it can provide the services humans want and need. It acknowledges the interconnectedness among systems, such as between air, land and water. It integrates ecological, social, economic and institutional perspectives and it ensures that planning and management is collaborative. It recognizes that humans cannot control or manipulate entire ecosystems and because
humans are a significant part of the ecosystem, policy, regulations and management must take a long term view to address ways by which human activities and ecosystems impact each other. EBM principles consider the entire ecosystem, including humans; develop and use scientific understanding of ecosystem functions, protect ecosystems based on the scientific understanding of them; acknowledge the interconnectedness within systems and among systems; integrate ecological, social, economic and institutional perspectives into decision making and adaptive management; integrate local knowledge to enrich scientific ecosystem understanding; and plan and manage in collaborative partnerships and with active engagement of stakeholders. Got all of that? Now, the draft report which I obtained a copy of for the office along with a supporting CD, is 66 pages in length.

Now, here is how things went. I felt very sorry for the presenters as they must have felt like cattle lead to the slaughterhouse. They read to us a prepared presentation which lasted about 20 minutes. Like the print information provided, the presentation was very complex, complicated and kind of all over the place. I think that the blank stares from us in the audience provided them with feedback as to how the presentation went. They then said that these presentations were going on all over the State coastal areas, and that the official comment period ended I think March 7 (yes as in two weeks) and the final report was to be forwarded to the NY State Legislature and the Governor by the end of March 2009 (no, that is not a typo). Of course this group of fine outstanding local citizens woke from their stupor and just about came out of their (our) chairs as it was very obvious that this dog and pony show was just to satisfy those in charge that they could say that they obtained the public’s feedback. So we then broke into groups to discuss certain aspects of this report, which remember we all just heard about in a 20 minute canned presentation for the first time, and went right over everyone’s head. Of course the general feedback from the group that I attended was that this might be a great program, but the process for approval was flawed to say the least. Again, I felt sorry for the presenter as some really vented their frustrations at her. You know, the railroading through of a program, which while it might be great, in a manner that the public will not comprehend, let alone have a clue what it is all
about.

The program ended with each person getting up and saying what the one thing was that they would take from the program. Much to the surprise of the presenters, the feedback which they received was actually what the one most important concern which each of us had that the presenters could take back to their bosses. It was almost unanimous that pollution was our number one concern. Integrated with pollution was the concern for invasive species in our waters adjoining the ocean (remember, the Peconic Estuary was not the focus of this program other then maybe Block Island Sound), and the proliferation of these species
as a result of pollutants. Additional concerns expressed was sea level rising, the complexity of any permit process and the feeling of one person that man is “doomed” as we have done so much damage to date that we can not reverse the ultimate destruction of this ecosystem.

So I left the program, ready to drive off the nearest bridge and escape not just our collapsing ecosystem, but in shear frustration over this nine agency program (ever try to get two agencies to agree on anything let alone nine?) which has the very best of intentions and a very admirable goal, but could be swallowed up in the bureaucracy of it’s self created system and sink to the bottom of Peconic Bay. In all seriousness, if you skim the accompanying light reading (and suffer from insomnia), you will see that it includes mucho dinero to fund some excellent scientific studies which will either support or sink many current mandated guidelines. If this funding is ever granted, and the studies are done, and the DEC, US Fish and Wildlife, US Fisheries, NOAA, the Army Corp, DOS plus local agencies such as the Trustees buy into their results, it could actually result in some very positive outcomes. Yea I know, I am the eternal optimist.

When you’ve got through all that, additional information is available at the New York Ocean and Great Lakes Ecosystem Conservation Council Website, including access to the new interactive Atlas, and susbscription to their mailing list (listserv).