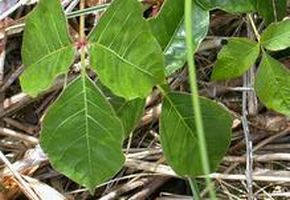 Even though we’ve only had about eight minutes of spring so far, even though I’ve only been out of my house without a sweater and/or jacket exactly one time in 2014, even though very few plants have dared to venture above ground as of yet, I have somehow already managed to contract my first bout of poison ivy.

It’s not surprising that my forearm is marred by the tell-tale blisters and incessant itching that defines poison ivy, I do not remember a single year of my life where I didn’t have at least one round. It’s just that it’s a little early.

I have spent exactly two hours working outside at the community garden this spring. During those hours, I had on long sleeves and gloves. And my own yard? Well, I’ve seen it when I’m on my way out back to feed the chickens. I’ve lamented about the tremendous amount of work that must be undertaken. But I haven’t actually touched anything out there.

I keep very close tabs on all the known poison ivy habitats in my surrounding areas. I know all about “leaves of three, let them be.” As a matter of fact, any leaves of three, no matter what they may be, I leave the hell alone. I have both physical and mental scars from the cases of poison ivy that I’ve dealt with throughout my life.

I went to my first day of third grade covered from head to toe with calamine lotion. It was particularly prominent on my face, where three-quarters of the visible skin was afflicted with some really attractive blisters. It wasn’t enough of a social death to be arriving to elementary school as an overweight tomboy. No, I hammered a few more nails in the coffin by being swollen, oozing and having skin the color of watery Pepto-Bismal.

Of course there were always medical solutions for dealing with the overwhelming, life consuming, ever-present itching. I used to get shots, of God knows what, to quell the suffering. I mean, it was the ’80’s. For all I know, the pediatrician could have been injecting DDT straight into my blood stream.

Whatever toxic death poison it was would only work for short bursts. And then I’d be back at it, scratching and tearing at my raw skin, much to my mother’s horror. The poor woman tried whatever they gave her, cortizone, calamine, and on one disastrous occasion, a prescription for Atarax.

Atarax, generically known as Hydroxyzine, is, “used to treat itching caused by allergies. It is an antihistamine and works by blocking a certain natural substance (histamine) that your body makes during an allergic reaction. Hydroxyzine may also be used short-term to treat anxiety or to help you feel sleepy/relaxed before and after surgery,” according to WebMD.

My last dose was given just before I broke down into a hysterical crying jag. I was despondent and inconsolable. I laid on the family room floor, curled up in the fetal position, rocking. You may wonder what set me off down the road to such a breakdown. Though I was a pre-teen girl and that’s probably enough of a reason, that wasn’t the cause. I lost my ability to function as a human being because my mom asked me what I wanted for dinner. And to be more specific, she offered the choice of either soup or sandwich. That decision was far beyond my grasp at the time.

Since then, I include Atarax on the list of medications to which I have an allergy. Some physicians have told me that my reaction is just that, a reaction and not an actual allergy. I’ve suggested they speak to my parents and sisters, or perhaps just give me a dose and then ask me an irrelevant question. Then they can classify my reaction.

Luckily, as I’ve aged, the bouts have become less severe. More often then not, I can cover the blisters with a bandaid and continue to function as a normal human. But I still maintain a fair level of paranoia when it comes to the shiny leaves of the poison ivy plant.

So, I can only guess that my current poison ivy outbreak is the fault of my dogs. Though it is possible for them to get the rash themselves, it’s not likely the oil from the plant will make it through their fur. Instead, it’s more likely that I will touch the dog and, unbeknownst to me, spread the sap across my own skin. And then a few days later, here we are.

So what can you do if you get poison ivy and don’t feel like rubbing death toxins onto the largest organ of your body? There are some other options.

Remember how your mom made you soak in those chunky, oatmeal baths when you had a skin rash as a kid? Turns out she was right. But you can manage current day rashes with a little bit less of a mess.

According to globalhealingcenter.com, make an oatmeal paste for relief, “Cook a small amount of oatmeal and apply it directly to the skin as a paste. Make sure to cook it very thick so that the paste will stick to the skin. Some sources recommend putting the oatmeal on the skin while it is very warm, as the heat from the oatmeal will eventually cool, leaving the skin dry and relieved. Make sure not to apply the oatmeal when it is too hot, as this can easily burn the skin. You may also try mixing in a teaspoon of baking soda, for an extra itch-relieving effect.”

A baking soda paste is always a good choice for skin irritations. Mix the soda with water and reapply every two or three hours.

Aloe vera has always been praised for its skin healing properties. It has a soothing effect and can be applied directly to the rash to help soothe and calm the irritation. We keep an aloe vera plant around the house, year round. And though I am a terrible plant caretaker, I’ve managed to keep this thing alive. They are quite tenacious. Snap one of the stalks in half and squeeze the fresh gel onto the rash for a little poison ivy relief.

Of course, your best bet is to avoid those leaves of three in the first place. If you’re smarter then me, that should be all you need. But if poison ivy follows you like a bad haircut, cook up some oatmeal and be glad you don’t have to say, “how was your summer?” to 22 third-graders.

Do you have a poison ivy horror story? I can sympathize with you at laurie@riverheadlocal.com.