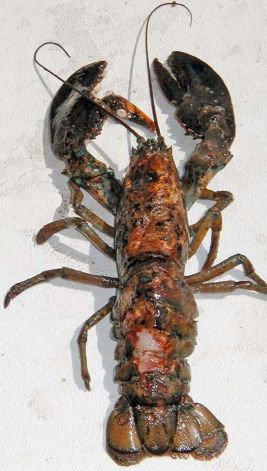 In 2010, fifteen scientists attended a conference that took place at the University of Rhode Island, and presented their findings following a three-year, $3 million URI Sea Grant to study lobster shell disease. Although a solution seems far off, marine biologists say that they are closer to understanding shell disease.

“We’ve been working on this for a while, and a lot of people have a lot of really good results,”
Hans Laufer said, a University of Connecticut research professor of molecular and cellular biology.

At best alkylphenols mean ugly lobsters (Warning: ugly photo below) that are destined for the canning factories instead of adorning North Fork dinner plates, and we need to care about them more (the lobsters).

He maintains that Alkylphenols interfere with the lobsters’ shell development and they are being found in lobster body tissues in Long Island Sound. Alkylphenols are the cause of the weakened shells, and bacterial infection that the lobster seems incapable of defending itself against, triggering shell molting as part of a hormonal reaction that includes females when pregnant. Lobsters suffering from shell disease show not only ugly discoloration, also wasting away of the shell itself, hence the canning factory destination rather than the dinner plate, some 30% – 40% of them fished from Long Island Sound.

“toxicity, persistence, and the liability to bioaccumulate”,

not to mention that nonylphenols are considered hormonally disruptive owing to its tendency to mimic estrogen.  The United States EPA on the other hand has taken a slower approach to make sure that action is based on “sound science”.

This week, Long Island Sound lobster fishers in Connecticut, who are grappling with the 12th year of a tragic die-off that threatens the livelihood of the few left in the industry, asked their state lawmakers on Wednesday October 6th 2011 to persuade neighboring New York to change the chemical used here to attack mosquitoes.

They are convinced that the pesticide methoprene, which is put in New York storm sewer catch basins to kill mosquitoes that may carry the West Nile virus, is responsible for a late-summer lobster die-off in the western section of the Sound following the rains of Tropical Storm Irene.

“New York is the one at fault,” said Roger Frate, a Darien seafood merchant and lobsterman. “This is what we know.”

Alkylphenols are a family of organic compounds obtained by the alkylation of phenols.

The attachment of an alkyl group to an organic compound, usually by the addition or substitution of a hydrogen atom or halide group, also the addition of an alkane hydrocarbon to an alkene in producing high-octane fuels. (Well, I sort of understood the last part – fossil fuels again.)

A corrosive poisonous crystalline acidic compound that is used in the manufacture of resins and plastics, dyes, and pharmaceuticals (as aspirin) and as a topical anesthetic in dilute solution, Phenol was discovered in 1834, when it was extracted from coal tar, which remained the primary source until the development of the petrochemical industry. Phenol was also the injectable toxin of choice used by the Nazis during the last days of the Second World War as part of its euthanasia program, because it was easy to make and quickly lethal. Another name for phenol is carbolic acid, and it’s a white, crystalline, water-soluble, poisonous mass. (Doesn’t sound like the diet of choice for a lobster).

According to Wikipedia, the long-chain alkylphenols are used extensively as precursors to the detergents, as additives for fuels and lubricants, polymers, and as components in phenolic resins. These compounds are also used as building block chemicals that are also used in making fragrances, thermoplastic elastomers, antioxidants, oil field chemicals and fire retardant materials. Through the downstream use in making alkylphenolic resins, alkylphenols are also found in tires, adhesives, coatings, carbonless copypaper and high performance rubber products. They have been used in industry for over 40 years. These xenobiotic compounds (a chemical which is found in an organism but which is not normally produced or expected to be present in it) are known, weak endocrine disruptors (hormonally active agents).

If Laufer is correct, and Alkylphenols are the cause of the lobsters’ problem, then it begs the question, are we willing to give up the lobsters or take greater care where our detergents and cheap suntan lotions end up? It’s not looking good for the lobster. Time to clean house.

The other possible culprit, Methoprene, is a growth regulator that pet owners use routinely on their cats and dogs. It’s one of the two active ingredients in Frontline tick medication. (Now I know that, I don’t think I’ll ever view the home video of a happy puppy romping in the open water in quite the same way.)

Sources used for this article and more information: